The life of a State Senator should always be dignified.  I try to assure that.

Yesterday, when I was speaking at a public forum put on by LULAC related to Prop 1, I was in a building that had an unusual amenity.  Being both curious and dignified, I unfortunately created this: 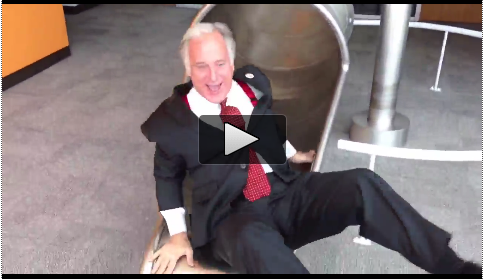 Can’t-miss article from this weekend

There was an article in the paper over the weekend about Proposition 1 and our efforts to keep Austin healthy. If you missed it, you should check it out.You’ll see that the article clarifies the connection between Prop 1 and the proposed UT med school. I want to highlight a couple of things:

First off, the article shows our community wouldn’t be the first to support a med school — not by a long shot. A whole lot of communities besides ours are getting phenomenal value by having faculty, residents and med students working to keep families and neighbors healthy.I’ll be going through some examples of the benefits in other communities this week; watch my Facebook page for posts that begin “MED SCHOOLS MATTER,” and search Twitter for the hashtag “#MedSchoolsMatter.” As a quick example, the hospital district in Bexar County contributes more than $24 million each year in tax revenue for medical services for uninsured and under-served patients from faculty and residents at UT-San Antonio’s medical school, according to the Statesman.

Second, while the money for the medical school services would be a direct payment for community health care services, it’s still a critical revenue stream to run the med school. The article makes the point that UT won’t be able to move forward with the med school without this revenue.

So as much as we need the services that a med school will provide, UT needs us as partners to make sure it can run the facility in this very uncertain budget climate.

It’s easy to forget how much financial stress and strain our hometown university is under. For years, the Legislature has been cutting UT’s funding, especially in relation to the costs of teaching kids, and the university’s tried to make up the money by raising tuition. Now, some at the Capitol are threatening even the tuition funding, and there’s no indication of where the money will come from to make up that shortfall if it occurs.

Third, and most importantly, let’s not forget what Prop 1 will pay for. Again, the Statesman: “If approved, Proposition 1 is designed to help pay for a variety of initiatives besides a medical school, including a site for a new teaching hospital, public clinic upgrades, trauma services, expanded cancer services, more primary care and mental health services, training for health care professionals and prevention programs. Central Health plans to use the increased tax revenue to draw down additional federal money under a year-old Medicaid waiver program.

“Under that program, communities judged successful in improving health care for poor people can get up to $1.46 for every $1 they invest. Central Health estimates that the $54 million in new tax revenue could be used to pull in about $76 million in federal aid, for a total of about $130 million.”

And don’t be confused about what’s going to happen with your tax bill (despite some misinformation that some folks are trying to circulate): Prop 1 would raise Central Health’s tax rate by 5 cents per $100 property valuation. Central Health’s held its rate all-but-frozen for eight years, so the arithmetic says that increase translates into a big percentage for our health care district. But for an owner of the average-value home (valued at a little over $200,000), it works out to less than $108 a year, or $9 a month — about 2 percent of your total tax bill, for the most part.

Given the transformational impact that Prop 1 will have on our health, our economy and our future, that’s a reasonable, very smart investment.

But more than that, if we don’t pay for this on the front end with Prop 1, we’ll pay for it on the back end, picking up the tab for more and more of the uninsured who clog ERs with ailments that could have been treated more cheaply elsewhere (which also, by the way, makes it harder for us to get emergency treatment when we really need it).

Oh, yeah: Prop 1 also will help propel the economy (by allowing a medical school to be built here) and help make Austin a center for medical research and excellence. And it will give Travis County residents more medical treatment options right here so they don’t have to travel to other cities for cutting-edge cures.

This is a tremendous investment for our community’s health and its future. We’re not going to get another shot at it.

One more time, here’s a link to the story. Check it out. And please vote FOR Proposition 1. Early voting starts (can you believe it) on Monday.