Have you voted yet?

Before we begin, here’s a pop quiz:

What hasn’t happened since the 1950’s? (Hint: I’m not talking about a bad Texas drought.)

Right now, Baylor is enjoying its highest football ranking in about 60 years. According to the coaches who vote in the USA Today Coaches’ Poll, the Bears are the fifth best team in the country.

(In anticipation of those who will drop me a nice note saying we’re not as high as fifth in all polls, yes, I know that we’re sixth in the AP Poll and eighth in the BCS Poll.)

Suffice it to say that this is an exciting time to cheer for the Baylor Bears. I went to Baylor, as you probably know, and our son Cooper is a freshman there this year. Cooper’s spent enough time watching his dad endure rough Baylor football seasons that I think he gets how special this season feels.

We all went up to Waco for the Homecoming game against Iowa State on Saturday night. Baylor won 71-7.

(I keep re-reading that last sentence; it’ll stop being unbelievable any time now.)

Before the game, a giant herd of freshmen students – the “Baylor line” – ran out on the field. Here’s what they looked like: 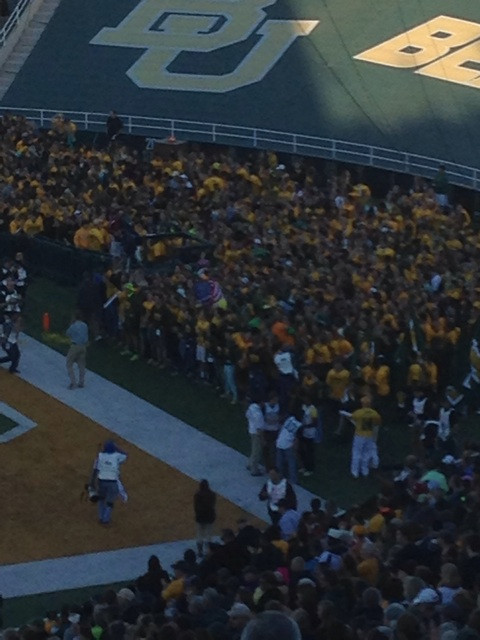 Cooper’s in there somewhere.

Yes, there’s an election going on

It’s almost November of an odd year, and you know what that means:

We all get to go vote again!

Yeah, there’s an election going on right now – early voting started yesterday. But unless you live somewhere like Houston, where they’re electing a Mayor, City Council members and a Comptroller, or like North Austin, where there’s a special election for a legislative seat, it’s understandable if you haven’t heard much about it.

For most of us, the ballot consists mainly of amendments to the Texas Constitution. Compared to the U.S. Constitution, our state constitution is a very long, often quite technical document that gets amended frequently. The legislature can pass an amendment on a two-thirds vote, but any changes have to be ratified by Texas voters.

The marquee item on the ballot this year is Proposition 6, which would dedicate $2 billion from the Rainy Day Fund to water projects across the state. I wrote about this at length last week, and I was glad to attend a bipartisan press conference yesterday supporting the measure. Proposition 6 has gotten support from environmental and business leaders, from Democrats and Republicans, and from rural Texans as well as urban Texans. I hope you’ll support it as well.

All told, there are nine propositions on the state constitutional ballot. I voted to put them all on the ballot during the regular session, and I voted in favor of them yesterday. Here are brief summaries of each proposed constitutional amendment:

Much of this information came from a very good summary by the Texas Legislative Council. If you want to know more about the constitutional amendments, go here or here.