I’m not a fan of games of chance. That’s not a statement about any gambling legislation this session. It’s more a recognition that games of chance aren’t fans of me.

As I’ve written before, when I was in middle school and high school, I pole-vaulted. Whenever a competition finished in a tie, with a couple of us ending at the same height and with the same number of misses, we’d break the tie by flipping a coin or cutting cards (these things had to end somehow, I guess).

As I recall, the first five times I was part of a tie, I lost the flip or the card cut.
Most Sundays around track season, my father and I would go up to the high school after church so I could practice pole vaulting. It’s one of the great memories I have of my dad.

The track circled around the football field, and the runway ran down the visitor sideline into the pole vault pit. It was just him and me on spring days out there. But if I ever whimpered or whined even a little bit about not wanting to practice, my old man would look at me with an arched eyebrow and say, “Son, you really need to practice so you can maybe beat these boys straight up. You ain’t winning any coin flips.”

So I tend to approach games of chance with powerfully realistic expectations, lots of failed history, and an instinct for seeing pretty much any glass as half-full.

They call you lady luck, but there’s room for doubt.

Here’s the deal: the Texas Constitution sets forth a redistricting process that requires new districts to be drawn every 10 years after a census. It also requires that all 31 Senate seats be up for a vote after redistricting so that senators will be elected from the newly created districts.

So we went through redistricting last session, and we were each elected or re-elected from our newly drawn districts in November. With my luck, I was guaranteed only a two-year term when I was re-elected in 2010 because there was going to be a redistricting after the 2010 census.

But remember, senators are supposed to have four-year terms that are staggered – roughly half of the Senate up each election cycle. So last Wednesday, we drew to determine which 15 Senate seats will be up for election in 2014 (the next election cycle), and which 16 will be up in 2016.

(Regardless of whether you’re up in 2014 or 2016, the Senate terms will be for four years. The next time a state senator will have a two-year term should be in 2022, after the next census and after Senate lines are redrawn. All of that changes if there’s another apportionment between now and 2020, however. Make sense?)

Being in the group of 16 that gets an initial four-year term is considered preferable, since those folks get to concentrate on legislating for a longer time before having to think about an election.

Naturally, given my luck, I’ve assumed for a while now that if someone preferred a particular outcome in any game of chance, I’d end up with the other one.

If it wasn’t for bad luck …

The calendar creates some cool drama on the Senate floor. Obviously, we’re only supposed to draw for terms every 10 years, so days like Wednesday don’t come around too often.

The Secretary of the Senate put together 31 plastic capsules. Each one had a piece of paper folded up inside, numbered from 1 to 31, which is the number of Senate districts.

This little capsule helped determine how I’m going to spend at least part of the next couple of years.

The little capsule is then put in a hermetically sealed envelope. At the appointed hour on Wednesday, in the presence of the entire Senate, each of us got up, one at a time, in alphabetical order, to solemnly pull an envelope out of what looked like a very nice punch bowl.

Some of us then opened the hermetically sealed envelope, while others had the Secretary of the Senate do it. Once the envelope was open and the little capsule was retrieved, there was the sound of a drum roll. Actually, the drum roll may have been in my head.

As luck would have it, my name puts me near the end of the alphabet, so I got to watch the drawing unfold before my name was called. It was uncanny how the odd numbers and even numbers kept pace with each other: back and forth, odd-even, it seemed like every time there’d be one or two odds, there’d be one or two evens, and vice versa. 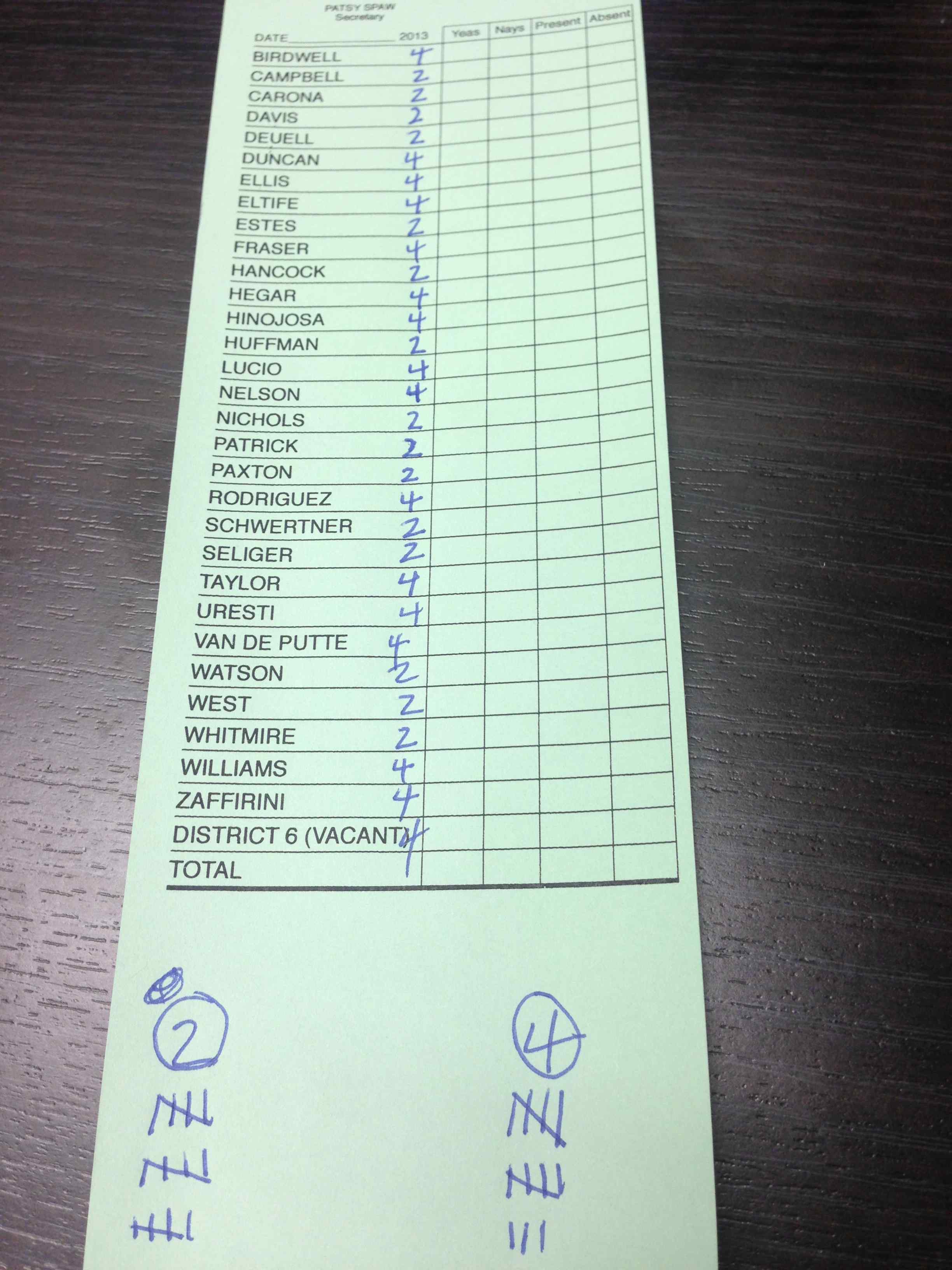 Here’s the sheet I used to keep score of who was drawing what as it happened.
So when my colleague, Senator Leticia Van de Putte, who’s just ahead of me alphabetically, drew a four-year term, I saw that one more senator had pulled an odd number than an even number. I had almost no doubt about what mine would be.

I felt like a 16-year-old pole vaulter, but not in a good way. I knew my fate.

And, sure enough, I fittingly drew number 14. As a result, my District 14 Senate seat will be on the ballot in ’14.

Now, I have to say that, as bad luck goes, this isn’t all that bad.

First of all, nothing changes about what I’ll be doing this session. My priorities will still be creating a more open and honest budget, providing for our kids’ education, improving our water supplies and transportation networks, and taking other steps to fortify our middle class and our economy.

I love Texas, and I still believe Texas can do better in all of these areas. I’m going to work as hard as I can to make sure that it does so.

Second of all, I richly enjoy serving the people I represent. This last election, I got to campaign in Bastrop County, South Austin and other communities that were new to the district but very familiar to me. It was a blast, and I’ll be glad to get out meeting and talking with folks again next year if that’s how everything works out.

And third, again, I can’t stress this enough: no one who knows me was surprised. It’s hard to feel too bad about something you always figured was going to happen anyway.

No gambling on the Senate floor.

It was certainly better than my last game of chance on the Senate floor, when we drew for seniority after I was elected.

Back in 2006, the four newly elected senators who hadn’t yet been seated drew numbers to see where we’d end up in terms of seniority. I ended up last, number 31 out of 31 senators, the bottom of the totem pole and, if absolutely nothing else, the holder of what would technically be the least desirable Senate office in the Capitol.

But, as I said at the time, I really couldn’t care less. I’m happy to be here. The prospect of having to run for re-election means you’re getting to serve in the first place.

I love being the senator for District 14.

Now let’s get back to work.