Today marks the halfway point for the 85th Legislature. Only 70 days left and a whole lot of work still to do.

I’m doing my best to serve the good of Texans. In recent weeks, I’ve been speaking out a lot about some really bad legislation while carrying some really good bills that will make a difference in people’s lives, such as my five bills aimed at strengthening sexual assault laws to protect victims.  And keeping up my commitment to government honesty and transparency, I’m working hard to pass multiple bills that will ensure public access to government contracts and other basic information.

And then there’s my feral hog bill. People are understandably riled up over the prospect of spreading poison around the state in an effort to kill feral hogs. My bill requires a scientific study to look at the health, environmental and economic effects of the Department of Agriculture’s ill-conceived plan. 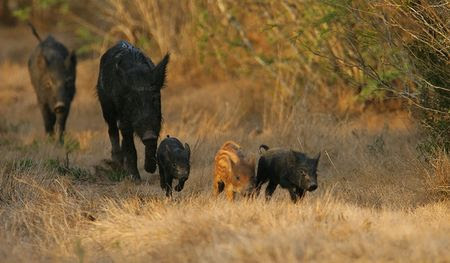 Of course, the biggest bill in every legislative session is the budget. As a member of the Senate Finance Committee, I’ve been deep as a pig in slop as we’ve been crafting the next two-year budget, which the committee is set to vote on this week.

This budget is going to be as ugly as an old sow, largely because of short-sighted decisions made by lawmakers last session that mean we have far less revenue than needed to maintain current services.

I’m pleased with the work I’ve done to put some lipstick on this pig and make a bad budget a little less bad for retired teachers, bolster Child Protective Services, and protect state employees. But the Senate budget, if enacted, will do some serious damage to higher education.

We are a long way from done on the budget.  There’s lots of process to come.  I’m working to make it better over the next 70 days.

There’s one easy way to make that budget better: use the rainy day fund.

The Comptroller of Public Accounts says there will be $12 billion available in the rainy day fund that lawmakers could use to reduce some of the pain of budget cuts or at least invest in our crumbling state facilities, such as the state mental hospitals, including the Austin State Hospital. That amount far exceeds what experts say is needed to maintain our top credit rating.

Voters authorized the creation of the fund in 1988 to avoid huge budget cuts to basic services in the face of an economic decline. Even the very conservative former Finance Committee Chairman Steve Ogden said it would be “ridiculous” not to tap the rainy day fund.

I’ve disagreed with my friend many times over the years, but this time I agree with Chairman Ogden.