On Saturday afternoon, about 3,500 people (according to the Texas Tribune) from around the state marched up Congress Avenue for a rally in support of Texas’ children, its schools, its economy and its future.

I was honored to welcome the crowd to the Capitol and to talk about what’s going on with Texas schools — and what we can do to make sure the state does better by them.

Please take a few minutes to watch the video of my speech. My prepared remarks are below, but I’ll bet you already know the gist of it: 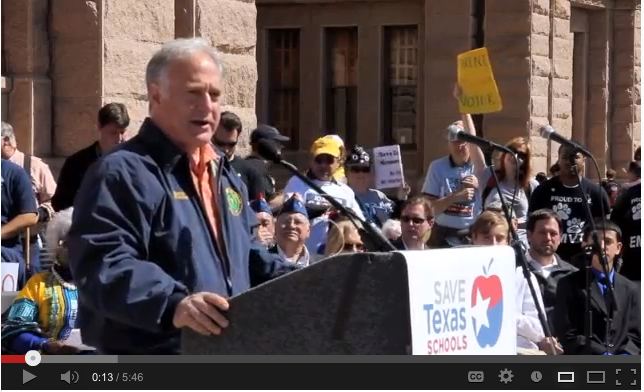 Thank you all for being here … Isn’t it a great day to be in Austin, Texas?

And isn’t it great to be supporting Texas schools?

I’m honored to welcome you all here to your state Capitol, and I’m proud to stand with you today.

We’re here because we love Texas and we love Texas schools. We’re proud of our state’s great history when it comes to fighting for our schools and defending them from harm.

And we know Texas can do better, Texas has done better, and Texas children and schools deserve better than they’re getting from this legislature.

Now, we all know our state’s future depends on whether our kids will learn enough to thrive in the 21st Century economy. That isn’t news to any parent or teacher in this audience or in this state. And let’s face it: you have to talk a lot about the economy to get anywhere with the folks in control of this building.

But it’s time — it’s past time — to talk about the kids, too. Let’s focus on the young Texans who will owe so much of their lives to the things they’re learning in school right now.

And let’s imagine how great the Great State of Texas would be if every single child could get a world-class education right in their neighborhood school. No matter what she looks like. No matter where her parents are from. No matter where she lives — in the ’burbs or the barrio; the gated community or the ghetto.

Just imagine what we could become if every last one of Texas’ children was prepared to succeed and prosper in the 21st Century.

People under that Dome speak all the time about issues like individual liberty, individual prosperity and economic development. But as soon as the subject changes to how to help those kids, it’s like these so-called leaders forget how to talk.

There’s no excuse to wait any longer. The verdict is in, and it says Texas’ school system isn’t adequate, isn’t fair, and isn’t even constitutional.

This legislature is failing our children.

It’s failing them by refusing to restore the $5.4 billion that was unconscionably cut away from schools, teachers and kids two years ago. It’s shameful and immoral that the legislature isn’t working right now to restore these resources — especially now that we know Texas has the money to do that.

The legislature is failing by refusing to even talk about finding a permanent solution to the school funding crisis. Instead, those in control are sitting around like some litigious, deadbeat dad, waiting for an even higher court to force them to meet their responsibilities.

It’s failing by entertaining a deceptive, destructive voucher scheme that could take money from public schools and funnel it to unaccountable private ones.

Those in control fail every time they refuse to be honest, open and accountable in describing what’s happening in our schools. Every time an elected official uses deception and denial, or plays fast and loose with basics like funding levels or graduation rates, our kids suffer.

And the legislature is failing our kids by trying to stake out this new normal — one that allows Texas to do less and less for our kids even as the 21st century demands more and more of them — at this instant where the state’s changing demographics and economy make free, public schools more important than ever.

The good news is that we can fix all of these things. Your state representatives and senators could walk into this building right now and start addressing all of these failings.

So it’s time to stop waiting to do the right thing.

It’s time to demand as much from this legislature as we demand from a child.

Thank you for being here, and thank you for fighting to save Texas schools and to build a better Texas.