The End of School … and of the Session

Our youngest son, Cooper, graduates from high school on June 6.

Anyway, Cooper’s a very bright kid – he loves science and math. He’ll pursue both at Baylor University (his choice, I swear) and will even live in a new dorm called the East Village where science and engineering kids will live. We’ve talked about how important it is that he not sell off his meal card for pocket change; I still intend to discuss it some more. 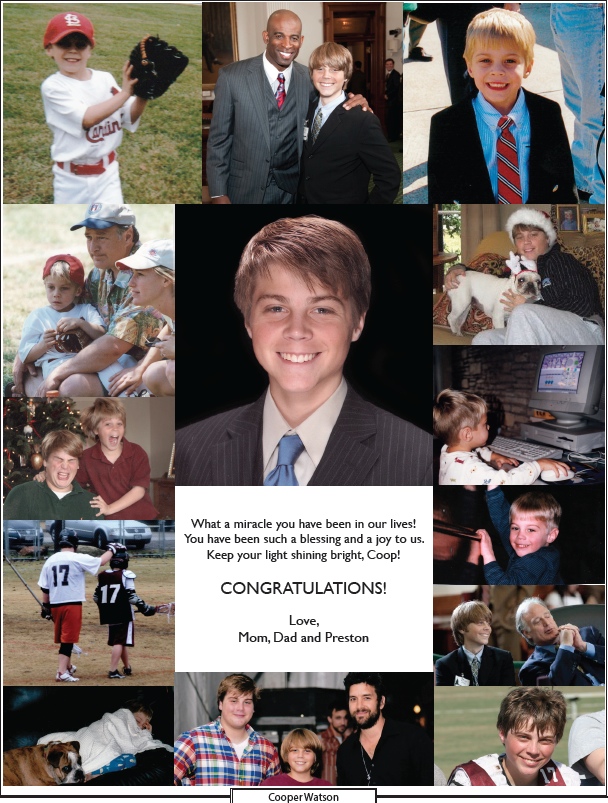 Obviously, we’ve spent a good chunk of the past couple of years looking at colleges. On one of the visits, Cooper talked with a Dean of a College of Natural Sciences and her Associate Dean. I sat apart from the three of them as they discussed his interests and everything he’s done in high school (“founder and president, Austin High Chemistry Club”).

As it became obvious to the Dean that this kid was for real, she turned to me and asked, without laughing or any apparent irony, whether he got his science acumen from me. I told her no.

So she looked at him and asked, “Where do you think you get it?”

He smiled and replied, “My brother Preston says I’m adopted.”

We all laughed. Then he said, “But I always tell him, ‘Remember, you’re the tall one.’ ”

It’s less than two weeks from Sine Die, the last scheduled day of the legislative session. And while the possibility of a special session is always there, legislators have a way of getting things done when it means not spending the summer in Austin.

(By the way, don’t take that overwhelming desire not to be here personally. If you’d spent the better part of four months away from home, you’d want to get back there too. Besides, most legislators keep running in election after election for the right to come back here every other year, so we must be doing something right.)

So there’s a strong likelihood that the legislature’s clock for tackling big problems this year will run out in 13 days. And if the book on the session really does close on Memorial Day, then what will the record look like?

First, I’m hopeful there will be some notable victories.

In the past week, for example, the Senate has passed two bills restructuring Texas’ retirement funds for teachers and employees in a fair way, protecting the state’s finances and benefits for our public servants.

Senator Robert Duncan, from Lubbock, carried both bills, and he’s worked hard with us to find middle ground that’s good for the state and its employees, teachers and future retirees. It’s been a true privilege to work with him in helping to negotiate these agreements on behalf of employees and teachers around Austin and across the state.

This is a technical issue but an important one, since so many public servants depend on those funds and the systems are so critical to the state’s budget. Also, far too often, retirement and pension funds become the focus of political fights, with folks looking to shrink government by whittling away at the benefits for public employees and educators.

These changes that the Senate’s approved will help ensure that the funds will be stable and reliable for future generations. They’ll raise both systems toward a state of what’s called “actuarial soundness,” which means the pension funds will be collecting enough revenue to cover obligations for future retirees.

And, most importantly, the bills will help protect these funds from becoming props or casualties in future political fights over state government.

I’m quite proud of the progress we’ve made in the last couple of weeks on addressing these funds. I’m also optimistic that the House will ratify that progress by approving these changes before Memorial Day.

I wish there was that much hope on other big issues facing the state.

The progress we’ve made on pensions sort of shows how much work there still is to do on other major challenges.

On basic issues such as budget transparency, healthcare investment, and the basic economic building blocks of schools funding, water supplies and transportation networks, I’m starting to worry that the legacy of this legislative session will be one of missed opportunities.

I’ll be writing more in the next week about these issues and the opportunities for addressing them before the clock runs out on Memorial Day. Check in on my web site, as well as my Facebook and Twitter pages, for updates. I’ll let you know what’s happening – good, bad and ugly – as the session hits its home stretch.

As much as we love this state and are proud of its successes, the fact is that Texas can still do better. I’d hope that regardless of our political party or beliefs, we all can agree on that basic premise: that this isn’t as good as it gets and Texas can do better and be better for Texans, our kids, our economy and our future.

The next two weeks will decide whether Texas actually does better.