The Fight Is On – Right Now

Right now, Senate Democrats are fighting to stop a bill that would jeopardize the health, and infringe on the rights, of Texas women.

Last week, I wrote and spoke about this legislation. Senate Bill 5 makes it much harder for women to get safe, legal and accessible health services. And it creates a back-room process to negate women’s constitutional rights over their own bodies.

This week, women and men from across Texas have flooded the Capitol day after day to fight SB 5. Many of us, in the Senate and the House, have argued late into the night that the bill needs to be stopped. 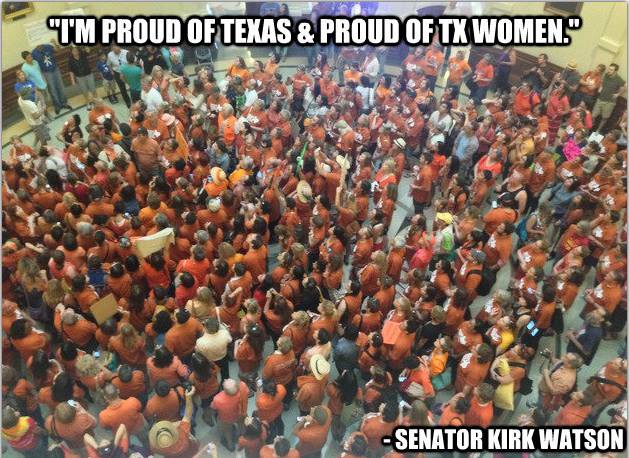 Democrats didn’t ask for this fight, and we didn’t want it. The proposals contained in SB 5 failed, as they should have, during the regular session. But those in control of the Capitol have tried to use this special session – which ends at midnight – to resurrect these proposals and push them through the process.

So alongside women and men from across Texas, we fought back. The fight’s nearly over, and we’re doing all we can to win.

Right this minute, we’re trying to wrap up our fight with a long filibuster, which we hope will go until midnight, at which point the special session will end and SB 5 will fail. Several Democratic Senators were ready to do the talking during this difficult speech – I even had my tennis shoes at the Capitol.

We chose to have Senator Wendy Davis speak on behalf of the women – and the men – of Texas. We will support her and do all we can within the rules to help her.

She will try to stand at her desk and talk about the bill without stopping – she can’t drink water or sit down or leave the Senate floor – until midnight. That’s about 12 hours away. But if she can make it, this fight will be over, at least for now.

As I said yesterday, there’s an assault on women in this state, and this legislation is a prime example of that. It’s important that a woman who’s the mother of two daughters will be the one standing. We’ll all be there providing assistance and help.

So what can you do? Well, you can watch the filibuster on the Texas Tribune’s livestream here. If you’re in Austin or you can get here, you can come to the Senate Chamber in the Capitol between now and midnight to support the Democrats as we try to stop this bill.

And you can let folks know what’s going on. I’ll be posting information all day on Facebook and Twitter. Please share it so your friends, family and followers can know what’s happening at the Capitol – and help us all put an end to it.