The Honey Badger and Me

It feels pretty good when your friends and peers recognize you for the work you’ve done.

And if you can be favorably compared with a honey badger, well, so much the better. 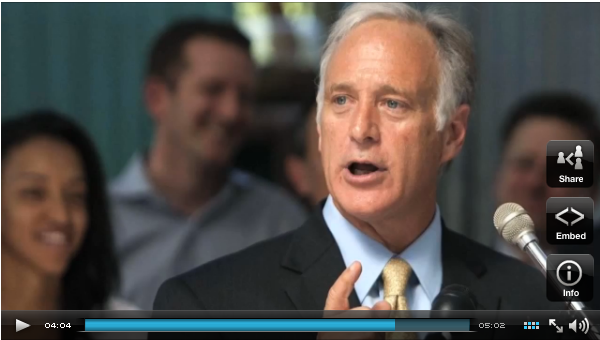 I’ve been deeply honored over the past few weeks to receive awards from a couple of groups in our community.

The Austin Business Journal honored me with its W. Neal Kocurek Commercial Real Estate Special Achievement award. Folks specifically cited my work as mayor to revitalize downtown, and my efforts last year to pass Proposition 1, which voters approved in November to improve health care across Travis County – in part by helping to create a new medical school at UT.

For that ceremony, the ABJ put together a unique and really great video of some good friends of mine saying very nice things about me.

In the midst of those compliments, I was compared to a honey badger.

It’s … well, it’s probably easier to just watch the video, and you really should.
Interfaith Action of Central Texas also honored Liz and me with its Hope Award for “inspirational leadership to the people of Central Texas and … outstanding accomplishment in service to our community.”

It was a touching ceremony, in part because our sons Preston and Cooper introduced us. And it’s a powerful honor to be recognized by Interfaith Action, which does so much good for so many people in our community.

As I said at the ceremony, Austin has given Liz and me so much more than we could ever give to it. I also pointed out that we have lots of things to be proud of, but those two boys bring us the most pride.

We’re down to just three weeks left in the legislative session. This week, major legislative deadlines are starting to kick in, and thousands of bills that haven’t advanced far or fast enough in the process will start to die.

As we pull into this home stretch, there are big, tough questions that still have to be answered about the budget, our schools, and how Texas will provide water and other basic necessities for future generations. I’ll be writing more about those issues in the next few weeks.

But in the midst of those headlines and deadlines, a lot of quiet progress is being made on a wide range of bills that will make a difference for Texans.

Here are four of my bills that have passed both the House and Senate and are on their way to the Governor’s desk:

Increasing penalties on hit-and-run fatalities: Senate Bill 275 would remove any incentive that people might have to flee the scene of an accident, encouraging them to stop and help accident victims rather than driving away. The bill increases the crime of failing “to stop and render aid” from a third-degree felony to a second-degree felony – the same level as intoxication manslaughter.

Reforming investor-owned water utilities: Senate Bill 567 is my bill overhauling the state’s oversight of investor-owned water and sewer utilities – and protecting customers from excessive rates imposed by these private providers. Among other things, the bill allows the Office of Public Utility Counsel to intervene in water rate cases on behalf of residential and small commercial customers.

Ending the use of carbon monoxide for euthanizing dogs and cats: Senate Bill 360 would prevent animal shelters from using carbon monoxide to euthanize dogs and cats in Texas. As of 2011, there were 29 shelters across the state still continuing with this unnecessarily cruel and expensive practice.

More tools for transit: Some cities in Central Texas are interested in providing more transit options, even though they’re not part of Capital Metro’s service area. Senate Bill 276 lets cities partner with Capital Metro on projects such as express buses or services for the elderly or people with disabilities. Georgetown and Kyle both supported this bill; I hope it helps the region continue its work to create a truly comprehensive transportation system.

That’s just a start. So far, I’ve passed eight bills through both the Senate and the House of Representatives (including the four above), and another nine of my Senate bills are out of their House committees and awaiting votes by the full House.

We’re starting our sprint down the home stretch. I’m confident that there’ll be more to report by the time we finish.