"They don't want to say how they feel"

During the last week of the legislative session, a kindergartener named John-Henry came by the Capitol for a visit.

(Yes, this is a true story. No, it doesn’t end with John-Henry fixing school finance or convincing the Governor to expand Medicaid. Please set your expectations accordingly.)

John-Henry got a look at many of the always-beautiful, occasionally functional features of this building – the Rotunda, the Senate and House chambers, etc. Part of his visit was to my office (located in Room E1.606 in the Capitol’s underground exurbs north of the dome; be sure to swing by if you find yourself tunneling to Round Rock).

I guess he had a pretty good time, because he sent a very nice letter to my office a couple of weeks ago. It included a drawing of one of the Capitol’s less-obvious attractions: one of the voting panels on the representatives’ desks in the House Chamber.

And the caption, apparently dictated by the artist, is, well, classic:

“This is a picture of the desks where the Congresspeople sit. They have these buttons for voting ‘yes,’ ‘no,’ and ‘they don’t want to say how they feel.’ ”

For the uninitiated, the third button actually registers a legislator as “present-not-voting.” If that seems technical and legalistic, it’s only because “I don’t want to say how I feel” is a little too accurate.

Of course, the Senate doesn’t use buttons at all. We just hold up fingers for the Secretary of the Senate to see what our votes are (one for “yes”, two for “no,” and three for “present-not-voting”). There’s not even a board like the one in the House with lights (lit up by those buttons on the desks) to show what each representative’s vote is.

In other words, we’ve sort of perfected the art of not letting people know how we feel.

Anyway, for your pleasure now (and John-Henry’s chagrin in about nine years), here’s the picture: 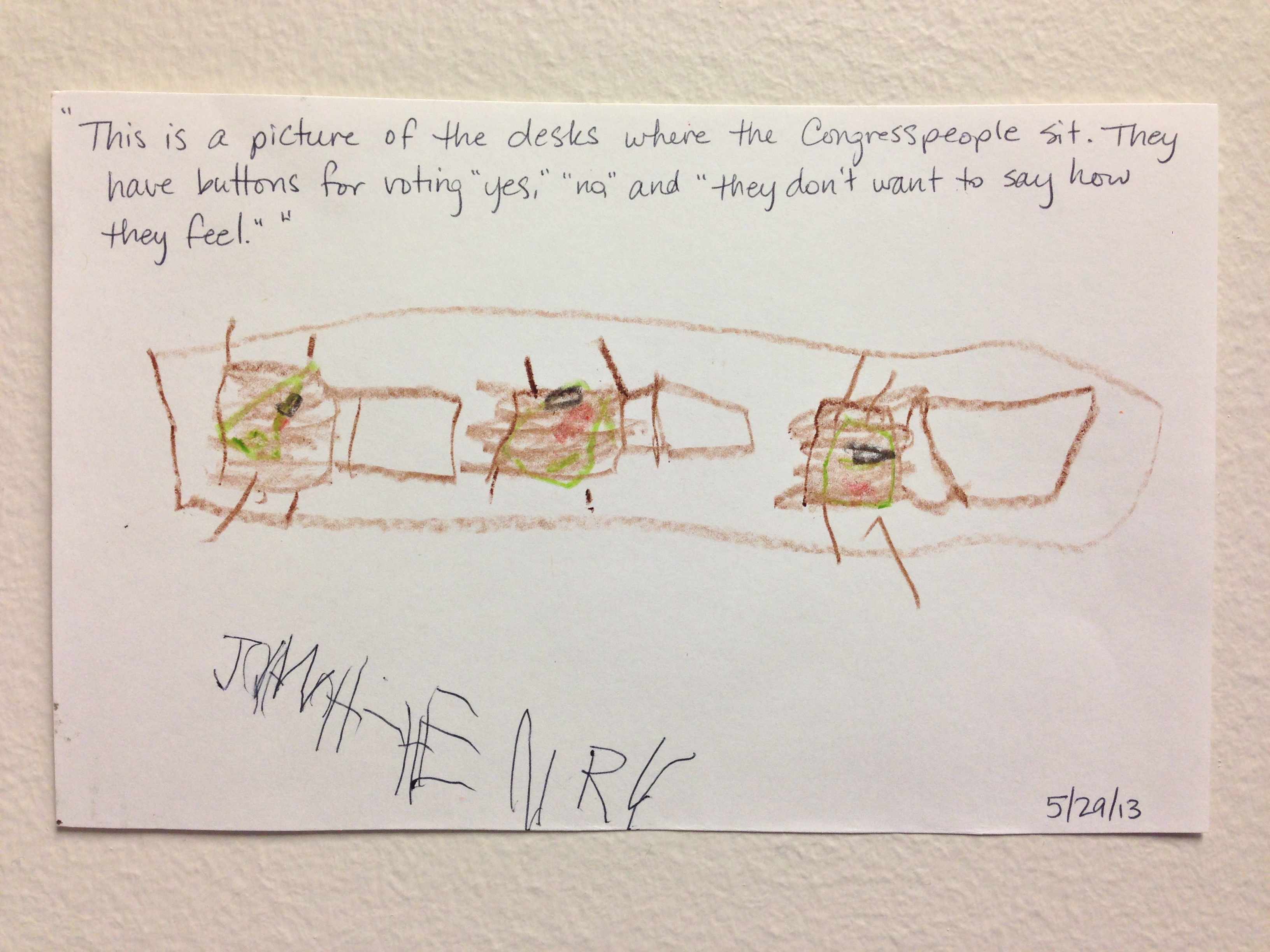 The “special” session continues to drag on. Yesterday was the deadline for submitting alternative redistricting plans in the Senate.

I filed one that would remedy the legal and constitutional problems with the legislative plan in Central and South Texas. It would restore the “crossover” district that those in control of the legislature are wrongly trying to destroy in Travis County and maintain the number of Hispanic “opportunity” districts.

It’s a common-sense proposal that shows the state doesn’t have to choose between the Constitution and the Voting Rights Act when drawing up a redistricting plan.

You can read more about it here.

Over the summer, assuming I’m not updating you on a pointless special session designed to prop up the state’s legally dubious effort to disenfranchise minority voters, I’ll be providing more details about actions the legislature’s taken in the last five months that will affect Texans over the next year and a half (when we’ll next meet for a regular legislative session) and beyond.

At least some of those actions may be undone over the next week, as the Governor hits the constitution’s deadline for vetoing legislation (look for a summary of what he whacks next week). So there’s still some risk of counting chickens before they hatch.

But there was no issue more important this session than funding for our schools and school kids. And I want to take this opportunity to update you on what we accomplished and what we still need to do.

All in all, I’m proud that the the legislature restored much of the funding that was cut in 2011. But Texas still can and must do better for our kids, our schools, and our future, and we’ll be working hard through this interim and into the 2015 session to make sure that Texas does do better.