We're Not Gonna Take It

On Friday, the Senate passed a Congressional redistricting plan that disenfranchises minority voters. On that same day, the Governor vetoed a bill that would have helped assure a woman is paid as much as her male counterpart for doing the same job.

And today, the Senate will take up some very bad bills blocking women’s right to choice and their access to health services.

So in between, over the weekend, I tried to find a break from a few pretty tough days at your Texas legislature.

I went to a couple of parades.

One was the annual Juneteenth parade through Central and East Austin. I rode in the Black Austin Democrats truck with Reps. Donna Howard and Eddie Rodriguez.

It was a ton of fun. And no matter what Rep. Howard says on her Facebook page, I never came close to hitting her with a Kirk Watson frisbee.

The other parade was a little … less formal. It was the annual Republic of Texas Biker Rally parade, which ran through East Austin and ended in downtown. I rode with motorcyclists from around the country on Friday night. It was a blast (and I’m not talking about the volume of the bikes).

The rally even attracted some celebrities. Here’s a picture of me with Dee Snider, lead singer of the ’80s band Twisted Sister. 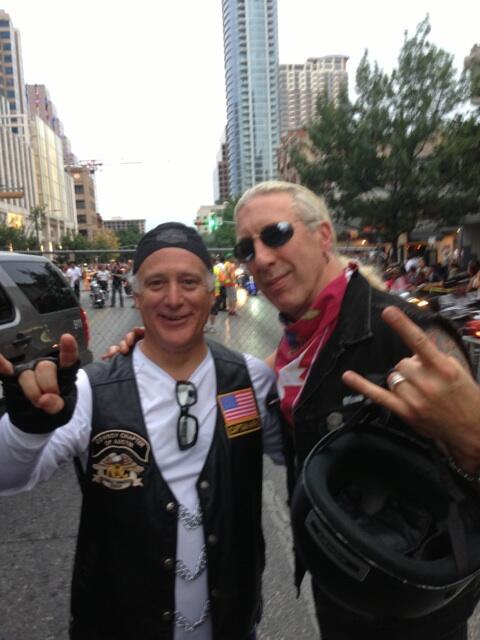 Twisted Sister, of course, brought us the hit “We’re Not Gonna Take It.” It’s timeless enough that Dee got into a kerfuffle (assuming it’s possible for heavy metal singers to get into kerfuffles) last year when Republican Vice Presidential nominee Paul Ryan used the song for campaign events. My new friend Dee thought that was wrong.

“Ryan and his people clearly didn’t listen to the words of the song,” he said at the time. “It says in it, ‘We’ve got the right to choose.’ It’s the first line!”

Anyway, I’m not planning to play the song at campaign events or anything. I have enough going on in my life without being crosswise with Twisted Sister.

But I will say that if you’re a woman or you care about women in Texas, and you’re looking for a song to get you through the next couple of days, you could do worse than “We’re Not Gonna Take It.”

We’ve got the right to choose

Today, the Senate will consider bills designed to create a back-room process to negate women’s constitutional rights over their own bodies – and to make it considerably harder for women to access health services they need.

As a package, the bills (among other things) would radically ratchet up regulations on clinics that provide these services. They’d also forbid women from terminating pregnancies after 20 weeks.

These bills died in the regular session, as they should have. But now, those in control of the Capitol are resurrecting them through a loophole in Senate traditions and rules – one that the Lieutenant Governor has shown to be completely arbitrary – that allows bills to come to a vote with less support than was required just a month ago.

You can – and should – click here to get a few quick facts about the bills that the Senate will take up today.

To get a true sense of how this state has been treating its women, connect some of the dots from the last few sessions:

These decisions come together in a way that seems specifically designed to ensnare Texas women.

And why? For politics. To win primaries. To appeal to a tiny segment of this state’s voters, no matter the effects on millions of Texas women.

These are political decisions that are part of a political war. Women are collateral damage in that war. The people waging it are building their political campaigns over the rights of Texas women.

The American Congress of Obstetricians and Gynecologists, the doctors who are experts in providing women’s health services, oppose what’s going to happen today because the bills aren’t based on sound science or because they would let legislators prescribe how physicians should care for their patients. These bills would take away women’s health services without a thought to the issues that lead women to seek these services.

Look, not one person I know likes abortion. Every single one of us who’s pro-choice wants to address this issue in a way that actually helps Texas women – like by reducing the number of unwanted pregnancies among teenagers.

We’re willing to work to help solve these issues. But these bills don’t really offer solutions.

Instead, they hurt Texas women. They’re a back-door effort to overturn something that’s been established law in this country for decades.

Texas women will suffer for it. And I hope they hold folks accountable for it.