I wrote some last week about a judge’s ruling that the way Texas finances schools and education is unconstitutional.

But that word, “unconstitutional,” doesn’t really do it justice. The ruling was a sweeping condemnation of the way Texas has failed to invest in our schools and our future, even in violation of our history, our identity and, yes, our constitution.

“The Court declares that the current school finance system violates … the Texas Constitution,” state District Judge John Dietz declared. He called the system “inefficient, inequitable and unsuitable,” and he found that it “arbitrarily funds districts at different levels below the constitutionally required level.”

He later called the school finance system “inadequate,” saying it doesn’t give schools the resources they need to achieve that constitutional standard of “a general diffusion of knowledge.”

It’s hard to think of a way that the system could be much more broken. Maybe if someone were stealing something … 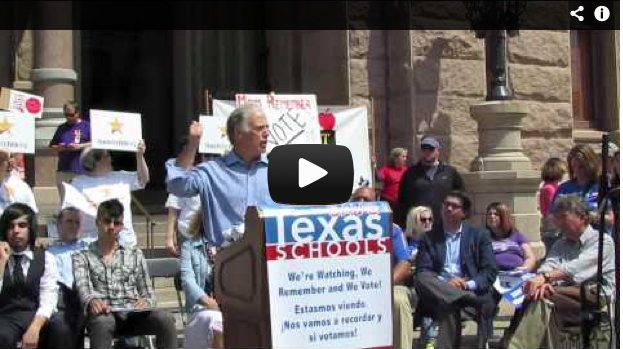 Time for action? Not so much

In a normal world, this ruling would bring, at the very least, some level of shame for the folks who created this system.

Something like this should fire up legislators – folks who are already in Austin to pass laws on things like, you know, school finance.

It should end the charade that our schools are good enough – that they don’t need to be better or that Texans don’t deserve better.

It should jump-start reforms leading to a permanent solution in how we finance Texas schools, ensuring that our kids all have access to an equitable and excellent education.

But in the world of the Capitol, this ruling has become a reason NOT to take action. That’s because it’s going to be appealed to the Texas Supreme Court. Those in control have made it crystal clear that they aren’t going to take action until the litigation wraps up, despite the roadmap that the lawsuit and ruling lays out.

Those in control don’t even seem to be seriously entertaining our work to restore the roughly $5.4 billion that was cut from schools two years ago.

What else is there to talk about

So what are those in control talking about this session?

Well, there’s vouchers – or, if you prefer, backdoor vouchers that reward companies with tax breaks for putting money into private schools, thereby reducing funding for public schools that our constitution is trying to protect.

Actually, scratch that. The concerns about backdoor vouchers (and doubts about their chances for passage) are so deep that last week, the voucher talk was actually talk about whether we should be talking about vouchers at all.

And what about the Governor? Well, he devoted precious little of his State of the State speech last month to even the possibility of providing more funding for public schools – backdoor vouchers seemed like a bigger focus for him, especially when it came to education funding.

So where was he in the days after this critical ruling, this moment that cries out for leadership? Naturally, he was in California.

Wouldn’t it be nice if he were thinking about kids in Texas and making sure they were educated enough to seek and create these jobs?

Better schools for a better Texas

One of the things about Texas that folks should be proudest of is our shared commitment to schools and education. That commitment was clear from Texas’ declaration of independence.

Texas kids and parents deserve a fair system that produces truly excellent schools and opportunities, not excuses or delays. They deserve the necessities that vanished with the 2011 budget cuts.

It’s ridiculous that, instead of helping these hard-working middle-class Texans, those in control are instead waiting on another court ruling that may or may not help them fix something they know is broken.

Texas can do better.