Not the session, of course – after all, who wants to stop cramming legislation down Texas’ throat while we’re all having so much fun?

No, what’s almost over is Cooper Watson’s 13-year time in Austin’s public schools. In August, he’ll head to Waco to study the math and science he loves at Baylor.

So this week is graduation week. Sunday was Austin High’s Baccalaureate Service for Cooper and his classmates. Wednesday is the ceremony for Cooper and the graduates of the Academy for Global Studies, a great program that Theresa McCorquodale’s been running at Austin High for the past few years.

And on Thursday, he walks across the stage at the Erwin Center and rides off into the sunset. Luckily, that sunset’s only about an hour and a half up I-35. 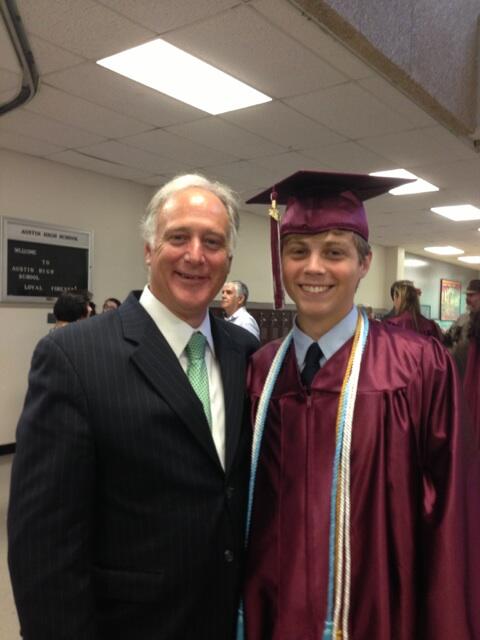 Coop and the old (looking very old) man at the Austin High Baccalaureate.

As for the new, “special” legislative session, we learned last week that it won’t be ending anytime soon.

The Senate’s Select Committee on Redistricting plans hearings this week and next, continuing down the ill-advised path of trying to short-circuit the process that’s playing out in the courts.

If you haven’t been following along … well, consider yourself lucky. But if you’re curious, here’s a relatively short version of what’s been going on:

Two years ago, in another special session (operating under a different set of Senate rules designed to disempower legislators who represent heavily minority areas), the legislature passed a set of district maps for state representatives, state senators, state board of education members and congressional reps that made it harder for minority voters to elect the representatives of their choice.

Some of those voters sued to have the maps thrown out. And they won. In fact, a federal court found that the Congressional and State Senate maps were drawn with intent to discriminate against minority voters.

So with a set of defunct maps and an election coming up, federal judges drew up some interim – they said, “interim” – maps that all of us could run on for the 2012 elections. They were meant to tide everyone over while the courts ruled on the final constitutionality of Texas’ redistricting plan and, presumably, came up with a plan that didn’t disenfranchise minority voters. Those maps would be the “remedial” maps.

Well, now the folks in control of the Capitol are trying to short-circuit the court proceedings by making the interim maps permanent.

It’s a cynical move: even the judges who drew those maps said they were meant to get us through last year’s elections, not satisfy federal Voting Rights standards. That, after all, is what the court case is all about.

If you want more, here are good write-ups from our friends at the Burnt Orange Report about some redistricting basics and the bad process change that will govern the redistricting process.

Last week, right as the special session was called, I had a public, on-the-record dialogue with the Lieutenant Governor demonstrating that the “special” rules governing the special session – and specifically the loss of the Senate’s traditional two-thirds rule – are applied pretty much arbitrarily to bouts of redistricting.

It’s just another sign of the legislature’s intent to bend the rules – or create new ones – to make it harder for minority voters to elect the representatives of their choice.

But enough about that … How about these bills!

One shame of the special session – and there are plenty of them – is that it’s distracting from the great work we accomplished during the regular session.

Over the next few weeks, I’ll be posting short synopses of bills that I passed this session. Here’s the first round (though all of these still need to be signed by the Governor, so stay tuned):

Public Message Boards: I passed a bill modernizing the Open Meetings Act to allow public officials to communicate with each other through a publicly viewable electronic communications board. This solves the problem of officials not being able to communicate with each other outside of posted meetings, and it ensures that the public can still listen in on the conversation. I worked closely with Attorney General Greg Abbott on this really important legislation.

Autism Coverage: This legislation says needed autism services will be covered by certain insurance carriers for kids who are older than 10 (the age at which current law says autism services can be cut off). This will help ensure that those with autism enjoy the highest possible quality of life, and that services reach those in need, no matter how old they are.

High value data sets: This bill creates a data inventory on the state’s main website – www.Texas.gov. It requires state agencies and institutions of higher education to provide the Department of Information Resources (DIR) with a description and link to data that is currently available online.

CAPCOG and 9-1-1 Fees: I passed legislation (together with State Representative Paul Workman) creating aRegional Emergency Communication District for the Capital Area Council of Governments, which covers Travis and Bastrop counties as well as eight others in our Central Texas region. This will be the only such district that both encompasses an entire council of governments and is run by the COG. More than that, the bill will help ensure that 9-1-1 fees collected in this region for emergency communications purposes are actually used for those purposes.

I’m proud of these bills. And there are quite a few others I want to talk about too. I look forward to being in touch this summer.

I hope you’re having a special one – or, at least, one that’s more special than this special session.