Super Bowl Sunday’s always kind of a tough day for me. It doesn’t matter who’s playing; I feel like I lose.

It means there’s no more football to watch. All of the football seasons – high school, college, pro, flag – are over. I mourn them every year at this time.

Also, there are no more holidays to look forward to. That’s unpleasant. And there are no more excuses that allow me to gorge myself with food that my diet’s supposed to keep me from eating. That’s really unpleasant – it means I’m running out of excuses for not training better for that half-marathon I’m supposed to be getting ready for.

Mayor Lee Leffingwell invited me to be part of his declaration that last Thursday was “Mack & Sally Brown Day” in Austin, Texas.

It was great to spend some more time with the Browns, who’ve meant so much to the University of Texas, the City of Austin and the State of Texas. I presented the Coach with a proclamation from the Texas Senate thanking and recognizing him. 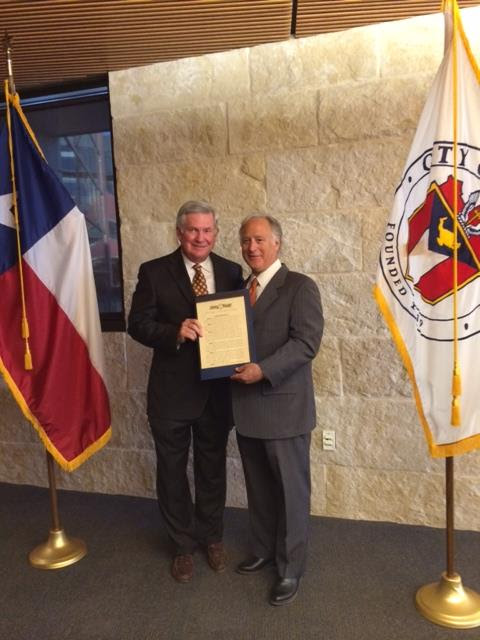 It was a fun time – Coach Brown always makes events like this more fun with his great sense of humor and the way he embraces people.

Yes, he publicly and appropriately teased me about my Baylor credentials. He also reminisced about how I was Austin Mayor when they came to Austin.

He pointed out that I held a parade for them after that season. And, he noted, they only won 9 games.

You can watch a nice clip of the ceremony here; Coach Brown starts speaking at the 8:02 mark.

There’s one season, of course, that’s just now ramping up: election season. This marathon’s already going, and a lot of us who are on the ballot will be running (sometimes literally) all the way through Nov. 4.

This year, we had a record turnout at the dinner. The featured speaker was another star Texas leader: Wendy Davis, our (just-about-certain) nominee this year to be Governor (you can watch her comments, as well as the remarks of Senator Leticia Van de Putte, our nearly certain Lieutenant Governor nominee, here). It was my pleasure to emcee the night and help introduce Senator Davis by saying a few words about Texas’ future and then calling up Wendy’s daughter, Amber, who in turn brought her mom to the podium.

Here’s a bit of my introduction from last week: 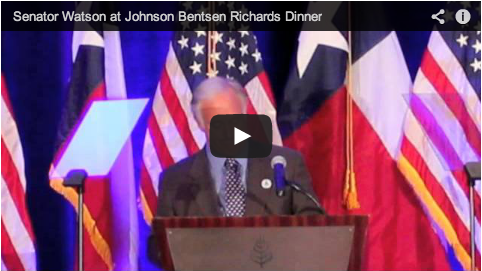 I was also glad to give a speech that sort of got the event started. You can read the whole thing here, but here’s an email-friendly excerpt:

My friends, we love Texas. From the hills and plains rolling out west, to the fields and forests to the east. From the cities, to the ranches, to the suburbs with names that sound like ranches.

We love this great state.

We also know that Texas can be even greater.

We know Texas can do a better job educating its children – investing in our classrooms and teachers to prepare future generations of leaders, executives and entrepreneurs.

It’s wrong – and I know we all believe it’s wrong – that our state’s attorney general is in court right now, defending an inequitable, inadequate school finance system against the very districts that are fighting the system itself to teach kids all they know to succeed in the 21st century.

We know Texas can do more to keep people healthy – by, in the very short term, swallowing outrageous political dogma and accepting the millions and millions of federal dollars that are available right now to expand our state’s woefully inadequate Medicaid system.

Texas can do better assuring a future infrastructure worthy of our children and grandchildren. A 21st century state this great, with this many resources, shouldn’t be reverting to the gravel roads of yesterday. Or have people unable to move from place to place, stuck in traffic. Or be thirsting for the water that will determine our quality of life because we failed and refused to invest or really plan.

Kids in high school and college today shouldn’t be among the first generation of Texans who don’t inherit the infrastructure they need to enjoy a prosperous Texas.

We know Texas can be even greater by building a better, stronger economy – one that values the mom-and-pop small business just as much as the multinational corporation. An economy that’s every bit as focused on 21st century wind and solar power as it is on 20th century oil and gas. One that creates real jobs for real people, spreading free-market prosperity through families and neighborhoods through nothing more than a fair wage for an honest day’s work. …

Because Texas can be even greater, but only if it elects leaders who actually will lead to that greatness.

I look forward to talking more about all of these issues over the next few months. And I deeply, sincerely appreciate your support as we work to create an even greater Texas.