So today’s Election Day. All of you who have been ignoring my pleas to go vote early, well, you’re just about out of time.
Most places, the polls will be open tonight until 7. But in Travis County, due to the cold weather this morning, you’ll be allowed to cast a ballot until 9 tonight. That’s a big deal. If you haven’t voted yet, make sure you get to the polls by 9.

Time’s up. No excuses. Go vote.

What’s in a meme

I really need to tell you about a meme contest that we’re launching this week to get folks to sign up for health insurance through the federal exchange and the Affordable Care Act. 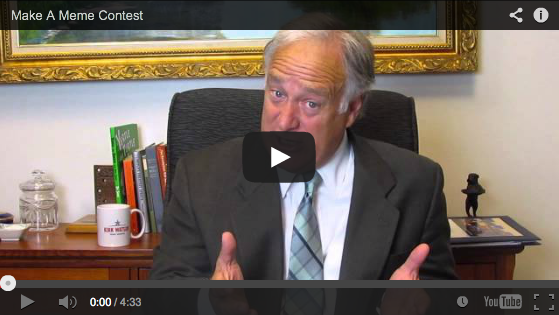 But first, I have to deal with that voice in your head – the one that’s saying:

“Hey, Watson! Aren’t you a little old to be using words like ‘meme’?”

To which I say, “Get off my imaginary lawn!”

Honestly, I think I first heard the word “meme” a year or so ago when we were talking about how to engage more people on social media. The first challenge wasn’t understanding why memes are important. It wasn’t even knowing what a meme was.

No, the first challenge was trying pronounce it.

I was ultimately instructed to pronounce “meme” so it rhymes with “seem.” Now that I’m fully committed, I expect some kid to tell me how old and square that makes me sound. And then to tell me that nobody has said “square” in decades, unless they were talking about actual squares.

I can’t even sound uncool in a cool way.

I really need to get that kid off my lawn.

Thing is, no one – not even us, uh, older folks, if we’re paying attention – can debate how effective a meme can be in spreading a message around to friends and acquaintances on social media. It’s pretty amazing how engaged people can be when there’s a catchy image and concise message to get folks’ attention.

So let’s put that power to work doing something good.

I’m launching this meme contest to help young people Get Covered. I’m doing it in conjunction with a great group called the Young Invincibles.

Your assignment is to create a meme – an image with text content – about why it’s important for young people to find a health insurance plan that’s right for them.

Here’s the problem: An estimated 1 in 4 young adults don’t have health coverage. That’s despite the passage of the Affordable Care Act and the fact that health insurance is more accessible than ever.

That’s not OK with me. It shouldn’t be OK with you.

So let’s do something about it.

Did you have a hard time enrolling for health coverage but are glad you followed through with it? Make a meme.

Do you have the perfect picture of little kitties that just screams “get me ACA healthcare”? Make a meme.

Have you always wished you could combine your talent for one-liners with your desire to help people find health insurance? Make a meme.

Get cracking. Submissions must be received by March 10, 2014. I’ll choose finalists and post them on Facebook on March 14. Send them in to meme@kirkwatson.com with the subject line “Meme Contest Entry.” (Click here for the full contest rules.)

If your entry is chosen and then gets the most “likes” before March 21, you’ll get a VIP tour of the Texas Capitol and four VIP tickets to my annual “Concert Under the Stars” party and concert. I’ll also tweet the results and include them in the Watson Wire.

I’m pretty excited about this idea. And I’m really fired up about the cause. Please be a part of it.

Make a meme. Send it in. I promise that, no matter what, I’ll pronounce it right.