Me and old Forrest Gump have quite a bit in common.  (Go ahead, make the easy “Stupid is as stupid does” joke.)

Cousin Forrest always seemed to stumble into making history.  Well, I had a Forrest Gump moment last Thursday night when I snuck away to watch Baylor play some football against Kansas State up in Manhattan, Kansas.

I had a sideline pass, which made me as lucky as Forrest. And, like him, I ended up on TV.  My brother got a screenshot of my Gumpian moment.  It looks just like I’m giving Baylor Coach Art Briles some of my simple wisdom. 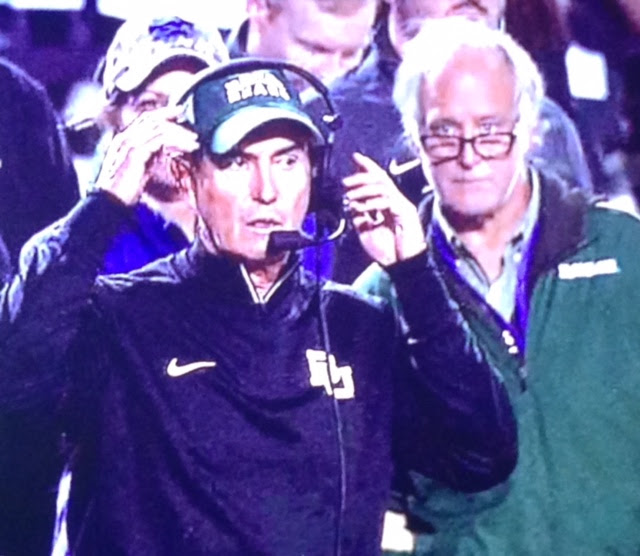 Of course, my story is that he took my wise counsel.  And that’s why Baylor is 8-0.

Folks have already started to notice that I appear to have given up on grooming. Don’t worry, it’s for a good cause…and temporary.

The last time I stopped shaving for several days was earlier this year during a 3,300-mile cross-country motorcycle trip from Austin to Sturgis, South Dakota.

I was looking a little, let’s say, unkempt.  Put another way, I looked seedy and scruffy. At one hotel where I stopped for the night, the desk guy looked at me, and then looked at my driver’s license, which has a fine picture of a clean-shaven me.  He did a double take and said, “Wow.  Looks like you’ve really gone all in on this vacation thing.”

Now, I’m going all in on the Movember Challenge to bring awareness to testicular cancer and other men’s health issues so, even though it’s only been a few days, I’m once again looking a bit scruffy. This challenge is a little personal.  I’m a testicular cancer survivor.  Back in 1992, I had multiple surgeries, including the removal of a testical, and I went through chemo.  Two years later, a routine CT-scan revealed another tumor in my abdomen related to the original cancer.  The doctors field dressed me by removing lymph nodes in my abdomen.

So while I’m supposed to be dead a couple of times over now, my last treatment of any kind for cancer was in April of 1995.  I’m well and healthy.

I feel a responsibility to talk about testicular cancer because, while all males of any age know the twins are down there, some don’t know that those boys can get sick.  Movember is an opportunity to talk about a variety of men’s health issues while raising money and awareness.

The rules of this Movember deal say you’re only supposed to grow a moustache.

I’m in violation of the rules and growing a beard.  I normally am a stickler for rules.  But ever since the Texas Senate scrapped the 2/3rds Rule, I feel like we live in anarchy anyway.  So I’m going with a full beard.

Plus, it’s a matter of LIBERTY!